Try something new and tell us what you think!
Your feedback will determine what new items are served in the dining halls.
At our first tasting of the year, try 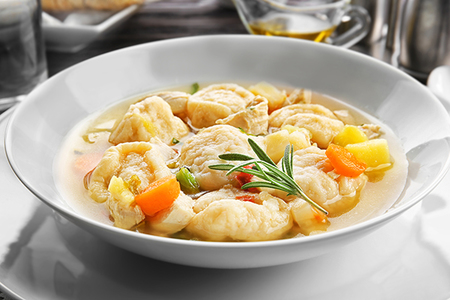 The United States has the largest broiler chicken (breed for meat) industry in the world. Chicken is raised worldwide, is accepted in most religions and many diets, and is an affordable source of protein. It can be used for comfort foods like fried chicken, or as a lean source of protein for lower calorie recipes.

Chicken became a cheap commodity food only recently. Most people raised chickens for eggs, so the animals themselves were valuable and only eaten on rare occasions. Since they lived older, and raised free-range, these chickens had small amounts of breast meat and plenty of muscley, sinewy meat. Original recipes of chicken and dumplings, for example, call for the chicken to be cooked far longer than is recommended today. Furthermore, these recipes celebrated the flavor of the chicken itself.

Chickens raised sustainably,  with more space and better nutrition, are more muscular and less fatty, so the difference in micro and macro nutrients of the meat are noteworthy. Studies show that chicken fed with grains and seeds has higher levels of polyunsaturated fat  and omega-3, which are the “good” kinds of fat that lower the risk of cardiovascular diseases and blood cholesterol.

Sustainability is about people, planet, and profit. All these dimensions are important, and sustainably raised chicken should not only be nutritious, but also allow farmers to work in healthy conditions, have a neutral impact on the planet and be sold at a price allowing good living conditions for workers.

The fourth dimension to be considered, especially for animal products, are the conditions in which they are raised, transported and harvested.

Public health officials say that antibiotic resistance is one of the leading human health threats of our time. Conventional livestock producers routinely give antibiotics to their animals, but when these drugs are overused, the bacteria can become antibiotic-resistant, which threatens the future effectiveness of these medications. Chickens that are antibiotic free have an impact on the entire supply chain, not only on the chickens themselves. Antibiotic free chicken are often raised in better conditions, to prevent diseases. USDA organic standards require better living conditions for the animals.

More generally, chicken has a lower carbon footprint than red meats. Substituting meat consumption from ruminants by other animals contributes significantly to reducing the carbon footprint.