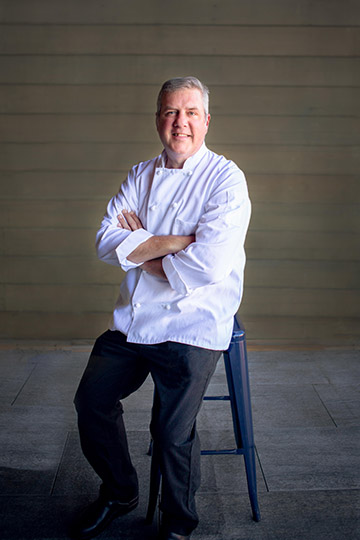 Join us for an evening with Chef Myles Anton of Trattoria Stella and The Franklin in Traverse City, Michigan

Myles began his cooking career at the tender age of 16 at Mama Loccrichio Family Restaurant in suburban Detroit. Throughout high school he worked all areas from dishing to managing this Italian family restaurant. Taking a break to attend St. Louis University, Myles studied pre-med curriculum. Needless to say…things didn’t work out so well in these studies and he set his sights on culinary school at Oakland Community College in Farmington Hills, Michigan. Over the next five years he attended classes and obtained his two-year Associate’s degree in Culinary Hospitality while working his way up to Sous Chef at the Townsend Hotel, a highly esteemed Four-Star, Four-Diamond hotel in Birmingham, Michigan. A brief stint as a private chef followed with multiple Sous chef gigs in Atlanta and metro Detroit.

In 1999, Myles opened D’Amato’s Italian Restaurant in Ann Arbor Michigan as Executive Chef. While in Ann Arbor he taught multiple cooking classes at the local bookstore and had the opportunity to work with the Food Network in Detroit and Chicago backing celebrity chefs for their food demonstrations. Anton especially enjoyed working with Sara Moulton, Ming Tsai, and Emeril Lagasse. In 2002 Myles once again left Michigan to open Bunker’s Wharf, an ocean side restaurant in a working lobster-fishing harbor in Birch Harbor, Maine.

2004 brought Anton to Traverse City, Michigan to open Trattoria Stella, an Italian eatery in the Old State Hospital. Stella was the first restaurant to open in the one-hundred-year old building under re-development after being abandoned for 20 years. Along with his partners, Amanda and Paul Danielson, Anton has focused on showcasing the foods of Northern Michigan while offering the highest quality of items from other regions as well. Over the years he has developed working relationships with over forty-five Northern Michigan farmers. All food items are made from scratch in-house along with whole animal butchery and a focus on utilizing the entire animal including the “nasty bits”. Six trips to Italy, Germany, Austria have allowed Anton to work alongside Dario Cecchini, the butcher of Panzano, Pamela Sheldon Johns, esteemed Italian cookbook author, and Christoph Wiesner, Austrian butcher of Heritage Mangalitza Pigs, on his farm near Vienna. Multiple stages in Italian kitchens in Palermo, Roma, Firenze have proved instrumental in the inspiration and refining of his cuisine. In 2014, the partners opened The Franklin in downtown Traverse City. This upscale pub is the culmination of his culinary journey featuring a dedicated bakeshop and butchery that supply both restaurants with their unique scratch products.

Anton has received regional and national attention. He is a five-time James Beard nominee for “Best Chef –Great Lakes Region”. He has cooked twice at the James Beard house bringing the products of Northern Michigan to New York City in 2010 and 2014. Twice he was the recipient of Traverse City News “Forty under Forty” award. In 2017, Trattoria Stella was named “Best Italian Restaurant in Michigan” by Mlive. In addition he has been highlighted in multiple local and national publications including Best Chefs America, Detroit News, Detroit Free Press, Chicago Tribune, New York Times, Rachel Ray, Cooking Light, Hour Detroit Magazine, and Livabilty.com.

At home he spends time swimming, biking, and enjoying the beauty of northern Michigan with his wife and two daughters, along with a lot of ball throwing to his dog, Benny.