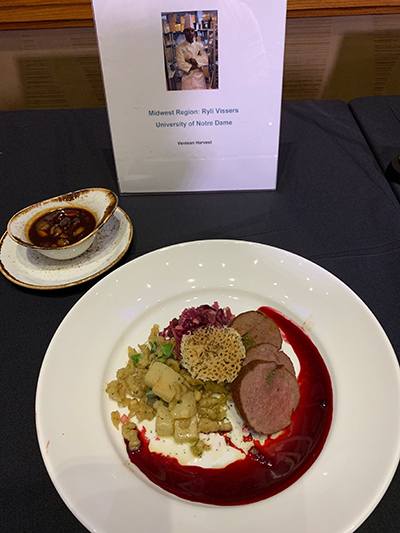 In March, Chef Vissers won first place in the NACUFS Midwest Regional Conference Culinary Challenge at the University of Northern Iowa, earning him a spot in the national challenge. His five competitors were the winners of their prospective regional culinary challenges, coming from across the United States and Canada.

As chef de cuisine for University Catering at Notre Dame, Chef Vissers leads a diverse staff responsible for a butcher shop, garde manger, grab & go, steward areas, and hot food kitchen. Emphasizing respect of both food and his teammates, he consistently cultivates a culture of excellence, resulting in exceptional food quality. Prior to this role, he served as a cook for the Notre Dame football team.

Before joining Notre Dame in 2016, Chef Vissers worked at a bakery and fine dining restaurant in Appleton, Wisconsin. He holds an associate’s degree in culinary arts as well as a certificate for advanced baking and pastry arts from Fox Valley Tech.

Looking to the future, Chef Vissers plans to continue to fine tune and improve the execution of his dish for future competitions.