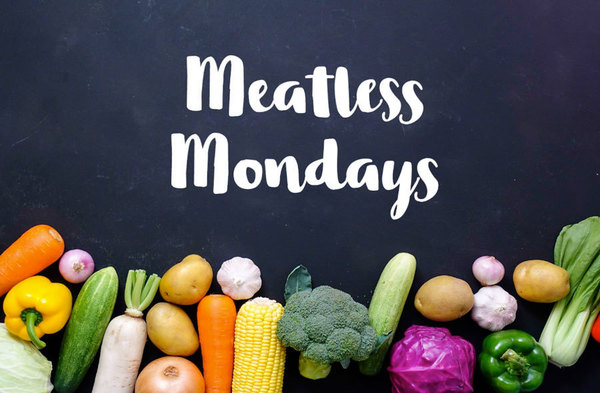 Meatless Mondays is a campaign borne out of the World War I food rationing campaign that asked Americans to express their patriotism by giving up meat one day a week to help feed soldiers and citizens abroad.  While its goals have evolved since that time, the core idea is still just as powerful: individual actions can have a major impact when practiced on a large scale. The idea is about building a better food system so that we have a better world.  In other words, having a healthier planet with healthier people living on it.

One of our challenges in the United States is a problem of excess; and we are indeed facing the consequences of “too much.”  Take protein for example, we are eating more than twice the EAR (estimated average requirement) or about 1 ½ times the RDA (Recommended Dietary Allowance) (Palmer, 2013).  The majority of our protein comes from meat and animal products.  And with that excess meat comes additional saturated fat and calories which is helping to drive up the rates of cardiovascular disease, obesity, and Type II diabetes.  Beyond health are the environmental stewardship and land use concerns. For example, if everyone in the United States ate no meat or cheese for just one day per week, it would be like taking 7.6 million cars off the road (Hamerschlag, 2011).  Experts predict that the meat consumption will double by 2050 as more developing countries shift to a Western meat-centric diet (Lawrence, 2017).  With this prediction comes the expected increase in preventable chronic disease, acceleration of climate change, and the depletion of natural resources.

This doesn’t paint a pretty picture for the years and generations ahead.  To that end, Campus Dining is partnering with some Notre Dame students and the Center for Social Concerns to revive Meatless Mondays in the dining halls.  The concept is not to get people to give up meat altogether but decreasing animal intake by selecting just one day per week to go meatless.  It’s about moderation and a tool to help people incorporate healthy, new, or overlooked foods into their diets.  And don’t worry, you can still get plenty of protein, calories, and nutrients from vegetables, grains, beans, nuts, and fruits.  Just keep an eye out for new and featured vegetarian items on our menus. I hope you’ll join us!

Lawrence, R., MD. (2017, December 18). How a World War I Rationing Program Could be Cause for Thanks This Holiday Season. Retrieved February 27, 2019, from livablefutureblog.com