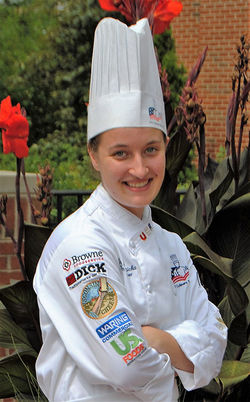 Campus Dining is proud to celebrate National Apprenticeship Week in recognition of our own culinary apprentices. Many Campus Dining chefs are graduates of the Campus Dining Apprenticeship Program, completing a three-year program during which they learn the entirety of the business of running a Campus Dining establishment. During this time, they move from certified cook to chef after stringent criteria are met. During their apprenticeships, our chefs have the opportunity to compete in local, national, and international competitions. From October 22-25, 2016 our own Anica Hosticka competed in the American Culinary Federation Youth Culinary Olympics in Erfurt, Germany. Below, Anica reflects on her experience and the benefits of being an apprentice.

When I began working as a culinary apprentice at the University of Notre Dame, just a month after graduating from high school, I did not know just how challenging but amazing the road would be to get my degree. I would not change my choice to be an apprentice for anything, because being an apprentice is giving me so much more than certifications and a degree…it is giving me the learning experience of a lifetime. Six months ago I became a member of the ACF Youth Culinary Team USA and I could not have been more honored. I was speechless and in almost disbelief when I first heard it. Managing my time between work, classes, homework, weekly log book entries, and preparing and traveling to practice in Charlotte, NC or Dallas/Fort Worth, TX every month just became normal.  The week before leaving for the Culinary Olympics in Erfurt Germany I completed my first 2,000 hours as an apprentice along with the 52 log book entries, one for each 40 hours (or week of work) and I could not have been happier to reach the milestone of being 1/3rd of the way to graduating. I completely finished 4 rotations, Stewarding, Breakfast, Vegetables, Starches and Pastas, and Butchering. 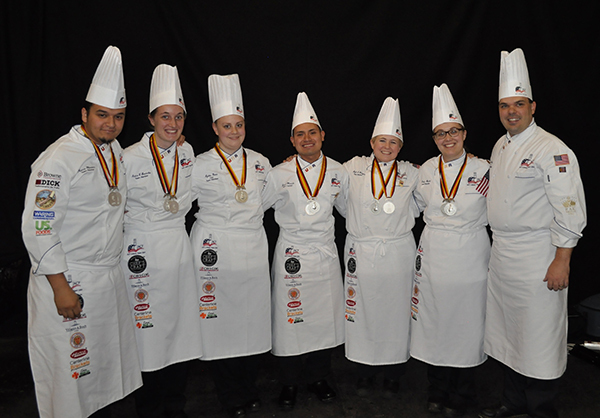 Off to the Culinary Olympics with around 170# of luggage I boarded a plane for an eight and half hour flight to meet up with all of my teammates for the last time in Germany. We worked together preparing for the competition in the old cafeteria at a BMW plant, organizing equipment and scaling out all of our food. Working cohesively as a team we knocked out all of our food prep in record time. As the day for competition inched closer the nerves and excitement grew. Our hot food competition (a three course plated meal al a carte for 60 people) had us up bright and early. Rolling into the kitchen at 6am we were ready, “One Team, One Dream.” Throughout the run we were quick to fix problems such as our frozen fryer oil. We had left it in the truck with all are equipment overnight and when we tried to pour it in the fryer and it was a solid block. We put it in the steamer to thaw it out the majority of the way and then finished melting it in a pot and finally put it in the fryer. As the window for service came closer we worked as a team to be ready on time. Winning a Silver medal for our hot food program, we were even more determined to get a gold medal in the Edible Buffet competition. We looked back on our hot food competition and used it to be more successful in our Edible Buffet Run, which going into the competition the expectations had changed from what we had practiced and from what we landed in Germany thinking. The changes for the most part ended up being in our favor but it was a challenge none the less. Moving from our prep kitchen on the main level to the finishing kitchen (which happened to be up two flights of stairs) was nerve racking but adrenaline filled.  Down to the last minutes we were the first team to have our cold seafood platter and finger foods finished on the table. After the judges received their plates the remaining 10 portions of the buffet were served to a table of guests. The live cooking entrée of guinea hen followed, finishing the night with a Spiced Bavarian dessert. We thought we had won a gold, but just one-point shy we were awarded a silver medal.

Walking up on stage at the awards ceremony with my teammates was amazing knowing that without all of us we would not have gotten two silver medals. We were disappointed that we did not get a gold medal but we were also proud of what we did accomplish. Leaving Germany was bittersweet. I proud of what we had accomplished but sad for this to be the end. I cannot wait to see what other adventures my apprenticeship will take me on throughout the next 2 years.