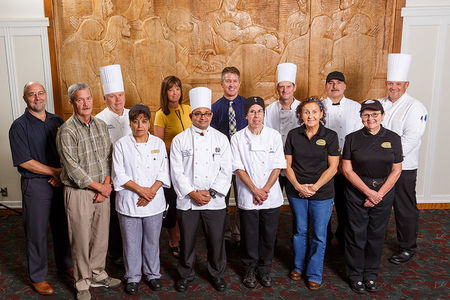 Working with staff, the team generated a reduction in waste of almost 30 percent, or roughly 36,000 pounds in four months (the equivalent of almost four elephants!) This was accomplished by an overall increase in awareness, and more timely preparation of food and pantry items closer to service.

In late October last year, the LeanPath Program was adopted, and three measuring devices were installed to weigh all waste destined for the landfill. The devices were placed in high volume areas such as North Dining Hall, South Dining Hall and the Center for Culinary Excellence, three operations with the greatest potential to reduce waste.

The Waste Warriors began the education process for all staff members. Their first task was to teach everyone how to use the new scales used for tracking, as well as build trust in the system with the end goal in mind — reducing waste. Moving forward, the warriors will continue their diligence in reducing waste during production and will be looking for additional opportunities to reduce waste throughout campus food and beverage outlets.