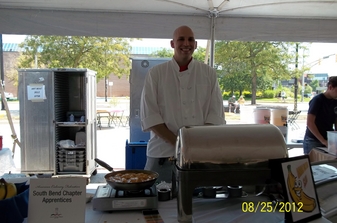 When Josh Maron took a chance (and a large pay cut) and resigned from his position as Cook at North Dining Hall, to sign on for a three year American Culinary Federation apprenticeship program, he probably didn’t picture traveling to Germany for the ”Culinary Olympics” less than a year later, but that is what is happening.

Josh began his career at Notre Dame Food Services as a Service Associate in the fall of 2009 performing duties such as washing dishes and attending to the serving lines.  Josh progressed to a Kitchen Associate in the winter of 2010 where the work included food prep and some cooking.  Finally in the fall of 2010, Josh became a Cook at the North Dining Hall helping to prepare meals for Notre Dame Students, faculty, staff, and guests.

In November of 2011, Josh took a leap of faith.  He signed on as an apprentice through the American Culinary Federation (ACF) with Notre Dame Food Services (NDFS).  As a nationally certified apprenticeship, the ACF program combines course work with hands on experience.  Each apprentice must work through all aspects of food service to develop a strong knowledge in the industry.  During this process, the apprentice gains skills and a passion for food.  They work in many food service units across campus including North and South Dining Halls, the Food Service Support Facility, the Morris Inn, Catering by Design, Legends of Notre Dame Restaurant and Alehouse Pub, and other locations.

In June, Josh was selected to participate in “be a member of ACF Culinary Team USA for a day.”  His selection to this elite group came from the demonstration of his organizational skills, his great personality, his drive to learn, and his great knife skills.  While working alongside the ACF Culinary National Team USA as they prepared for the “Culinary Olympics,” Josh impressed the group enough to be invited to work with Team USA in this international competition.

The “Culinary Olympics” or International Culinary Exhibition (IKA) will be held in Erfurt, Germany October 5th – 10th, 2012 and is coordinated by the World Association of Chefs Societies (W.A.C.S.).  This competition is the pinnacle of culinary competitions, occurs every four years, and this year will include 45 nations.  W.A.C.S. is considered the global authority on food.

Back at home on the Notre Dame campus, we will anxiously await the team results and the details of Josh’s participation.