Notre Dame Food Services dining halls reached record counts* again during the 2010-2011 academic year.  The combined efforts of both North and South Dining Hall served over 2 million meals last year hitting an all-time high of 2,140,000 meals served.  This number is up by 20,000 meals from the prior year.  These meals are only a portion of those served by Notre Dame Food Service with a multitude of restaurants, catering, vending, and religious houses all increasing this total.  Our participation continues to rise.  Last year’s increase included over 5,000 meals used by faculty and staff and an increase in student athlete participation through training tables.  Marc Poklinkowski, General Manager of South Dining Hall, attributes this rise to the economic pressures facing today’s student.  “We’ve actually seen a total increase of 100,000 meals compared to three years ago.  The first couple of years of increases was directly correlated with the economy.  This past year, both dining halls have concentrated on quality, and have also improved our variety various ways.  Students have responded positively to the changes, and we’re seeing that result in even higher counts, even with an economy that is slightly improving” says Poklinkowski. 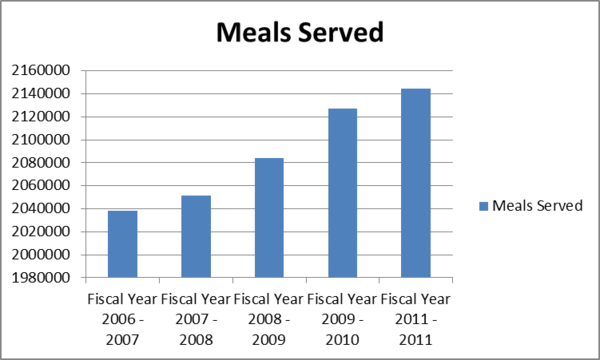 *records are based on counts since the inception of multiple meal plans.