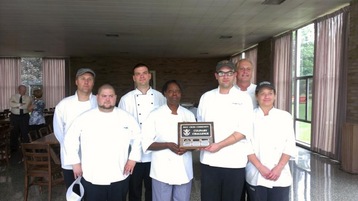 Like many culinary competitions, each team was given a market basket with identical items.  The teams utilized some of each ingredient in the market basket such as mussels, chicken, and pears to create their dishes along with a pantry of available items.  Another major challenge in the competition was the time window.  Each team had a four hour window to create their meals from concept to completion.

While the rivalry between houses was intense among residents, staff, and the competitors, teamwork was the result.  Each competitive team grew to work as a unit.  All the houses were united to create this battle and evolved into a better team as a result.

The competition was hosted at Moreau Seminary. 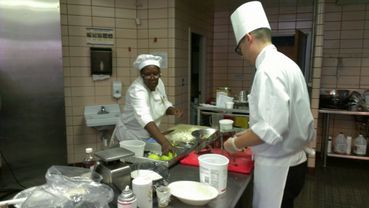 In the end, our champions reigned from Holy Cross House, Jackie Coleman and Bradley Crise, creating this winning menu:

Look for this success to expand on campus.