Launched in Fall 2011, Notre Dame Food Services (NDFS) is proud to recognize staff who accomplishes significant achievements.  These achievements would come from one or more of the following areas:

This achievement must also be accompanied by no lower than “Valued-Valued” in the performance review process, demonstrating teamwork, and consistently having good attendance.

The selection made by the NDFS Recognition Manager Working Group from nominations from co-workers or managers from all of NDFS staff of over 500. 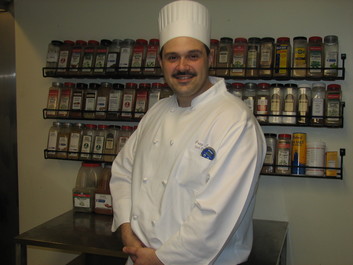 opportunity for NDFS to recognize outstanding staff members in this manner.  This summer this recognition goes to Greg Larson, CEC.  Greg is the Chef of the North Dining Hall.  Greg’s nomination was based on his day to day impact, leadership, significant program implementations, and positive feedback from others as noted in this nomination:

As Unit Chef of North Dining Hall, Greg goes above and beyond demonstrating his achievement through the sheer volume and the extraordinary quality of work he is able to accomplish.  He ensures all Catering event food items that leave the building are of the highest standard of quality, whether it be a simple lasagna delivery or a high profile Elite dinner event.  This has included organizing the entire production staff on both the hot and cold food sides to ensure production was executed for the first night game in 20 years (October 22, 2011) where production from his kitchen included over 60 events for nearly 9,000 guests just in catering with the addition of an extended student dining brunch.  Greg also takes a special interest in the various special events for student dining throughout the year including the Thanksgiving buffet, Lenten buffet and Cinco de Mayo.  He uses his vast culinary knowledge to introduce both new and authentic recipes during these events.   Student diners are pleasantly surprised to find Menudo, Pozole and Horchata to name a few items served for Cinco de Mayo.

During break weeks, Greg and the other Floor Chefs are able to execute various training classes to increase the staff’s culinary knowledge and enhance their culinary skills.  Greg is very passionate and enthusiastic about sharing his passion for the culinary arts which makes his training sessions animated, interesting, and informative.

In addition to success in the routine, Greg developed and implemented the Saturday night burrito bar in 2011.  Every ingredient having its own unique flavor profile that is complimentary to the others was the basis for Greg’s work to create these new.   North Dining Hall has since served over 900 burritos each Saturday night since the implementation; that means over seventy-five percent of the student diners choose Greg’s burritos over the other items served.

Investing in aspiring Chefs, Greg serves as an advisor to recent and future American Culinary Federation (ACF) Apprentices.  As a graduate of the Apprenticeship program, Greg not only shares his culinary knowledge, he also spends valuable one on one time with each Apprentice to ensure that they are successful in their endeavors as future Culinary leaders.

Added to his list of achievements, Greg recently became an ACF Certified Executive Chef.  He was also featured in Foodservice Director Magazine as one of the 30 under 30, featuring those up and coming in the industry.